NYMadness
In 2017, after seven years at the helm, Cecilia Copeland stepped down as Artistic Director to focus on her own writing.
As a company, NYMadness is still in operation supporting emerging playwrights with a mission of 50/50 gender parity. For information on the NYMadness current season, please contact Judith Leora or Tiffany Fisher-Love, contact information available at the company website. ​https://nymadness.com/ 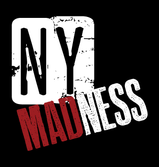 Madness: is a raw and unpredictable show of short plays by an ensemble of playwrights. Each night has a Theme. The Theme is given out a week before the event and then the collective works by all the writers in an evening kaleidoscope that cultural moment.

It is a snapshot of a particular time, reflected in an immediate way, from our unique perspective. Not only is Madness for emerging writers to have the opportunity to develop a strong relationship with a live audience, but it is a forum for all writers to explore the boundaries of modern theater.

In Season Five we expanded our company to include a crop of brilliantly talented Emerging Directors
the #NYMDC to go along with our NYMActing Company Members we launched last season.

​In the Spring we will Launched the First Ever MadLab: A Laboratory for #newplays that have grown out of NYMadness plays in our first few seasons.  We'll be presenting these plays in a week long festival of Readings.  Stay Tuned for Submission deadlines and details.