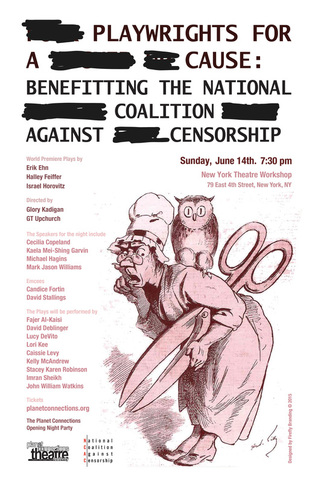 Each of those works by women, which have informed our cultural identity, were banned at one point and some were even burned. The one thing they have in common as the stated reason for being censored is their sexual content. Feels like a lot of slut shaming going on.

In the words of Virginia Woolf, “Chastity... has, even now, a religious importance in a woman's life, and has so wrapped itself round with nerves and instincts that to cut it free and bring it to the light of day demands courage of the rarest.”

I suggest that it’s not merely chastity, but indeed the expression of a woman’s sexuality that is so threatening. Words written by a woman’s hand describing sex, pleasant or not, defy the religious anti-sex mindset and shatter the virgin/whore binary. The work becomes an undeniable embodiment of autonomy in direct opposition to the patriarchy or, to put it bluntly, sexy shit written by women is really dangerous to the status quo.

As you may know our cause tonight, the National Coalition Against Censorship was formed in response to the 1973 Supreme Court decision in Miller v. California, which narrowed First Amendment protections for sexual expression. Without the work of the NCAC all of the titles I listed and more are defenseless due to that Supreme Court ruling.

Within this already sexualized context of censorship we notice the absence of women’s voices from theaters across the nation. Play productions in the US by female authors stagnate at around just 20%.

Theatre parity lagging so far behind other fields points us to address the factors censoring women’s plays before they even get to the stage. Some of these pre-stage hurdles include female protagonist identification problems, seventy cents on the dollar socioeconomic inequity in a market where few playwrights have the money or time to spare for writing, lower submission rates by women, the confidence gap, sexual harassment, and exploitation in the entertainment industry itself.

For example, even after 25 years of research in the Harvard Archives with full access to Bertold Brecht’s documents such that no other person had been granted, when John Fuegi’s book, “Brecht and Company” came out in 1994 crediting upwards of 60-80% of Brecht’s later plays to his female collaborators members of the media and academic community refused to believe it and still Margarete Steffin, Ruth Berlau, Marieluise Fleißer and Elisabeth Hauptmann remain unaccredited and unpaid for their work.

Fortunately the call for a Parity Raid is being echoed and answered. Companies like Planet Connections are a grassroots effort for many changes and gender parity is a big one. At Planet women are 90% of the staff and they have presented 17 Outstanding Playwriting Awards to women writers. My own theatre company New York Madness has presented a 50/50 gender parity lineup of writers since inception five years ago. If we can make gender parity a priority so can every theatre across the nation.

I’m here tonight representing my Staged Reading, which is one of several in the festivity and like The Handmaid’s Tale it’s a work of Science Fiction. Atlantis Unearthed portrays a global ecological disaster and among other things it rather explicitly explores modern sexual dysfunction. Given the banned works I mentioned earlier and the Miller v. California Supreme Court ruling, Atlantis Unearthed could easily land a spot on that list based purely on the sexual content. So, please come and see it. Be subversive. Support work that shakes our pillars to unearth what might be a deeper truth, and thank you to the NCAC.